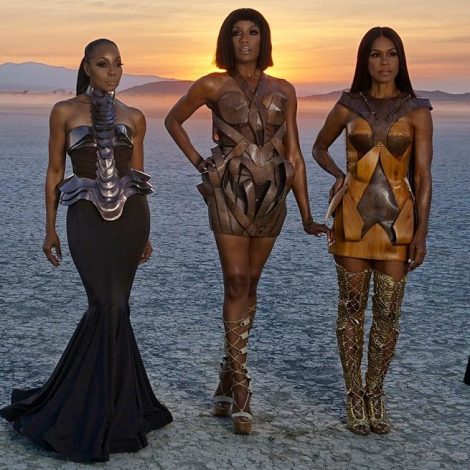 En Vogue is an American R&B/pop vocal group whose original lineup consisted of singers Terry Ellis, Dawn Robinson, Cindy Herron, and Maxine Jones. Formed in Oakland, California in 1989, En Vogue reached number two on the US Hot 100 with the single “Hold On”, taken from their 1990 debut album Born To Sing. The group’s 1992 follow-up album Funky Divas reached the top 10 in both the US and UK, and included their second US number two hit “My Lovin’ (You’re Never Gonna Get It)” as well as the US top 10 hits “Giving Him Something He Can Feel” and “Free Your Mind”.

In 1996, “Don’t Let Go (Love)” became the group’s third, and most successful single, to reach number two in the US, and became their sixth number one on the US R&B chart. Robinson left the group in 1997 shortly before the release of their third album EV3, which reached the US and UK top 10. Jones left the group in 2001, Amanda Cole joined shortly thereafter. However, in 2003, Cole left the group, and Rhona Bennett joined the group during the recording of their album Soul Flower. In 2005, the original members briefly united before disassembling again. In 2009, the original members once again reunited for their “En Vogue: 20th Anniversary”. Shortly after the tour, Robinson and Jones again departed from En Vogue, with Bennett rejoining the group as a trio.
En Vogue has sold more than 20 million records worldwide to date, and are often considered one of the best female vocal groups of all time.The group has won seven MTV Video Music Awards, three Soul Train Awards, two American Music Awards, and received seven Grammy nominations. In December 1999, Billboard magazine ranked the band as the 19th most successful recording artist of the 1990s. They ranked as the second most successful female group of the 1990s. In March 2015, Billboard magazine named the group the ninth most-successful girl group of all-time. Two of the group’s singles ranks in Billboard’s most successful girl group songs of all-time list, “Don’t Let Go (Love)” (#12) and “Hold On” (#23).