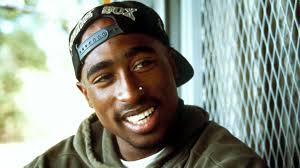 Tupac Amaru Shakur (/ˈtuːpɑːk ʃəˈkʊər/ TOO-pahk shə-KOOR; born Lesane Parish Crooks, June 16, 1971 – September 13, 1996), also known by his stage names 2Pac and Makaveli, was an American rapper and actor. He is considered by many to be one of the greatest hip hop artists of all time.

Shakur was born in the Harlem neighborhood of New York City but relocated to Los Angeles in 1988, and by the time he released his debut album 2Pacalypse Now in 1991, he became a central figure in West Coast hip hop, introducing social issues in the genre at a time when gangsta rap was dominant in the mainstream. Shakur achieved further critical and commercial success with his follow-up albums Strictly 4 My N.I.G.G.A.Z… (1993) and Me Against the World (1995). Later that year, after suffering legal troubles and a robbery and shooting, Shakur became heavily involved in the growing East Coast–West Coast hip hop rivalry.

His double-disc album, All Eyez on Me, which was released in 1996, later became one of the best-selling albums in the United States. On September 7, 1996, Shakur was shot four times by an unknown assailant in a drive-by shooting in Las Vegas; he died six days later and the gunman was never captured. The Notorious B.I.G., Shakur’s friend turned rival, was at first considered a suspect, but was also fatally shot in another drive-by shooting several months later. Five more albums have been released since his death, all of which have been certified platinum.

Outside music, Shakur also gained considerable success as an actor, with his starring roles as Bishop in Juice (1992), Lucky in Poetic Justice (1993), Ezekiel in Gridlock’d (1997), and Jake in Gang Related (1997), all garnering praise from critics.

Shakur is one of the best-selling music artists of all time having sold over 75 million records worldwide. Much of Shakur’s work has been noted for addressing contemporary social issues that plagued inner cities, and he is considered a symbol of resistance and activism against inequality.