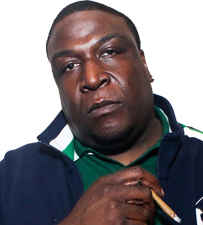 From the perspective of 2007 it’s not been long since B-Legit’s last endeavors; two years since the latest official solo “Block Movement” and a year since “The Purple House President” mixtape. Hillside, Vallejo veteran is back with the hereby “Throwblock Muzic”, bringing yet another portion of solid vibes.

I remember that when “Block Movement” came out some people were complaining about its production, that it was too Dirty Southish, too modern, didn’t match B-Legit, it’s not the same artist anymore etc. I do understand those concerns, because I tend to have similar feelings towards other rappers. However I didn’t share them in that case. I even have to admit that it’s my Bela’s favorite solo. What is more, it is one of my favorite albums ever and even though it’s been some time since its premiere, I still take it off the shelf and it still provides an immense amount of entertainment. I mention this on purpose, so you can understand the context of my review of “Throwblock Muzic”. On the one hand this cd is similar to its predecessor when it comes to overall feel and production. In short, if you enjoyed “Block Movement”, then you will like this one as well; and vice versa, if you didn’t feel those vibes, then these won’t be good enough for you either. However from my point of view it also suffers from “the bar was too high” syndrome – simply because I consider previous solo better in a few regards. It all comes down to (as always, by the way) production, because B-Legit is such an experienced artist that you should not expect any shortcomings from his side. He perfectly follows various rhythms, normally doesn’t show any emotions, just spits yet another explicit line with his low-pitched voice. He focuses on rather mundane, even typical things. You will find tracks about flirting with women (“Lil Mama”), partying in clubs (“Where My Bitches At”), smoking (“Bela Bluntz”), hitting the road (“Sittin”), pushing dope, bragging about one’s jewelry, being a boss etc. Nothing new in this regard, yet the artist does serve non-trivial word combinations, cared for interesting hooks, thanks to which there’s no room for boredom caused by secondary topics.

As I wrote above, the album continues these type of vibes that originated on “Block Movement”, but it does it a little different. It went one step further towards providing entertainment – there are a lot of beats over here that are meant to be light, brisk, even funny. I personally think that Bela doesn’t fully shine over such melodies. I feel a considerable lack of serious songs with heavy drum hits, bass and hard, typical West Coast sounds in the background. Well, you can find the likes of “Sittin”, “Bela Bluntz” or “Lounge Beat”, but they are overshadowed by light parties anyway, more suitable for Dubee or Duna – for example “Stunna Man”, “D Boye” or “Shinnin”. On the other hand I must admit that this music together with hooks create a nice and catchy medley that makes you memorize certain parts for quite some time, which is always a sign of a good recording. Polished music was handled by Troy “Tha Rolla” Sanders, Stix, Mall, Goldfingers, Mike Mosley, Young L, Andre Samuel, LJ, E-A-Ski, Quazadelic and B-Legit himself. So generally “Throwblock Muzic” is a very solid solo and you should definitely get in hold of it if you enjoyed previous endeavors by the rapper. Nevertheless it is evidently aimed for people craving for modern, light, easy to digest entertainment, instead of serious, hard sounds.